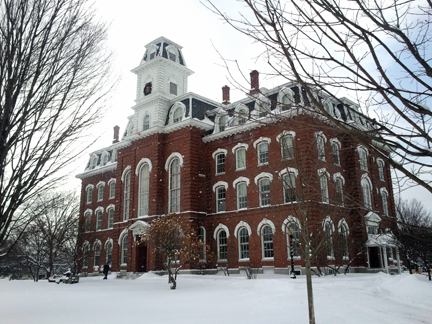 The MFA in Visual Art program would like to invite the community to join us for presentations with our Visiting Artists, as well as student exhibitions, January 28 through February 3.

The daily exhibitions are free and open to the public most days. Please be considerate of critique groups and closures as needed for academic purposes.

Gallery may be closed for critiques and reviews as determined by the program.

Mildred Beltré, is a Brooklyn-based artist, mother, and popular educator working in print, drawing, and participatory politically engaged practice to explore facets of social change. She is interested in exploring political movements and their associated social relations and structures. Her most recent work involves looking at revolutionary theorizing and posturing through a feminist lens.

Her work is included in the Special Collections of the Brooklyn Museum, Brooklyn, NY, and the Walker Art Center, Minneapolis, MN, among others.

She has been awarded residencies at the Lower East Side Printshop, the Vermont Studio Center, and the Santa Fe Art Institute. She has received grants from the New York Foundation for the Arts, the Brooklyn Arts Council,  Brooklyn Foundation, and the Rema Hort Foundation, among others.

Beltré is the co-founder of the Brooklyn Hi-Art! Machine, an ongoing socially engaged collaborative art project in Crown Heights, Brooklyn that addresses gentrification and community building through art-making.

The Brooklyn Hi-Art! Machine is a socially-engaged project started in 2010 by artists Mildred Beltré and Oasa DuVerney. Dubbing ourselves the “Official Unofficial Artists in Residence” of our block, we set up tents, tables, and art supplies on the street outside our apartment building and invited anyone walking by to stop and make art with us. In this way we co-founded the Brooklyn Hi-Art! Machine (BHAM), a collaborative public art intervention that explores art-making as a community-building tool.

Often when a neighborhood is undergoing rapid change, outdoor space is criminalized for some while being preserved for others. One thing that the BHAM seeks to do in its insistence to be outdoors, and particularly on the street, is about claiming the street as a generative space for people of color. Public and collective projects are a way of combating the social isolation that leads to suspicion amongst neighbors as opposed to cooperation. By engaging our neighbors on the street, we facilitate conversation and trust which is often lost when a community undergoes significant transition and upheaval. Our vision is to facilitate a public space for community members—often silenced by socio-economic circumstances—to get informed, feel empowered, create, and organize to take positive action.

As artists it is important to us to not create work solely for the gallery, but also to use our practice to make artwork with and for our community. By creating weavings and art activities on our sidewalks we provide a visible and participatory space for Crown Heights residents of all ages to see and interact with each other. These workshops serve as a creative outlet for our neighbors and provide an opportunity to engage with each other outside of the daily routine and thus encourage a new kind of interaction, one leading to new social relations based on mutual respect and understanding. The fence weavings provide an opening for that conversation amongst neighbors to begin.

Oasa DuVerney is a Brooklyn-based artist and mother, born in Queens, New York. Selected exhibitions include “The View From Nowhere,” Rush Arts Gallery, NYC (2016); “The Window and the Breaking of the Window,” Studio Museum in Harlem, NYC (2016); The Brooklyn Biennial, BRIC, Brooklyn NY (2016), “Crossing the Line,” Mixed Greens Gallery, NYC (2013); “March On!,” Brooklyn Academy Of Music (2013); “Through A Glass Darkly,” Postmasters Gallery, NYC (2012). 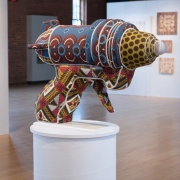 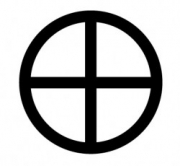