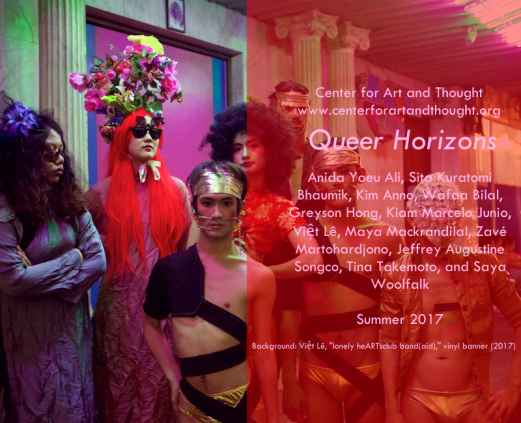 Queer Horizons features the work of Asian American and Asian diasporic artists whose work envisions a queer future that unsettles the past, disrupts the present, and imagines new worlds beyond the limits of the horizon.

We take inspiration from José Esteban Muñoz, the late queer studies scholar, and his conception of a “not yet here.” As he explains in Cruising Utopia, the “not yet here” is a phenomenon of queer futurity that “allows us to see and feel beyond the quagmire of the present.”

Within the last ten years in the US, we have celebrated the legal recognition of same-sex marriage, the end of “Don’t Ask, Don’t Tell” and the formal acceptance of gays in the military, and increased visibility of LGBTQ bodies and personalities in popular culture. In our present moment, however, LGBTQ rights, safety, and health care are increasingly under threat. Simultaneously, the current administration frames Asian American communities as “un-American,” the after tremors along old Yellow Peril fault lines. They are foreign, unassimilable, undocumented: Muslim “terrorists,” hordes of H1B visa techie taking over American jobs, or “model minority” students taking up too much space in classrooms.

However, the artists and works in Queer Horizons name a possibility beyond the “model minority”: as queer Asian American artists, they disrupt the model minority narrative defined by heteronormative notions of success. Each artist engages a non-linear temporality moving between pasts, presents, and futures, and each work gestures towards a queer history that we, as Queer Asian Americans, can excavate, (re)create, and (re)produce in our pasts, presents, and futures. For example, Greyson Hong’s Costco photos, Việt Lê’s productions of club scenes/ online performances, and Tina Takemoto’s unconventional short film all tell of an alternative past to inform a queer alternative future. As we think of these experiences at the intersections with undocumented status, foreignness, and Islamophobia, their highly experimental and queer aesthetic in storytelling suggests further radical potential.

It is in this dangerous political climate that the artists in Queer Horizons insist on claiming liminal and hybrid spaces and lives, queer collectivity, and intersectional solidarity. Embracing failure, misbehavior, non-normativity, and defiant joyfulness thus becomes a radical form of resistance. This is the kind of utopian horizon that we call forward. In the spirit of artist Jeffrey Augustine Songco’s video, “Let’s Dance America!”

Contributors’ works are published in staggered waves from late-June to late-July 2017, after which the whole exhibition are archived permanently on CA+T’s website.

Special thanks to the Andy Warhol Foundation and the California Institute of Contemporary Arts for fiscal support.