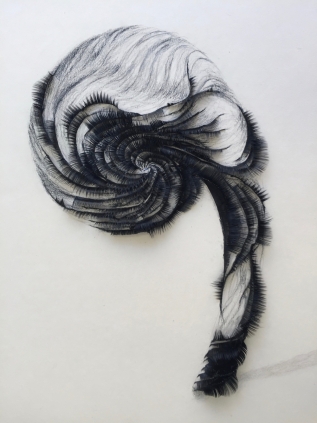 Through sculptural and video installations, digital animation, drawing, printmaking, and artist books, Sowon Kwon has employed translation as both artistic medium and the subject of critique in her art since the early 1990s. Kwon’s formative early work From the Land of Porcelain, 1993, turns James McNeill Whistler’s Peacock Room, 1876-77, into a series of reliefs. This piece offers a literal shallowness of depth to correspond to the symbolic flatness of Whistler’s design, influenced by fantasies of Asia. The installation was included in The New Museum’s 1993 exhibition Trade Routes, which, like the more-studied 1993 Whitney Biennial, addressed cultural identity in the face of globalization. However, identity politics is about much more than cultural exchange—It is about the negotiation of the self.

The exhibition coffee table comma books includes work from across Kwon’s career and is conceived, in the artist’s words, as “a small registry of various associative couplings: then and now, writing and making, homophones and namesakes (샘 and Sam), the domicile and the workplace, the literal and the figurative, the private/personal and the public/historical.”

Kwon’s 1994 relief sculpture Coffee Table and Escritoire (after Godwin), presented here at Full Haus for the first time since its inclusion in The Queens Museum’s 1994 exhibition Live-Work, depicts an anamorphic interior space furnished with a writing desk and side table designed by Edward William Godwin, a nineteenth-century designer whose “Anglo-Japanese” style influenced the Arts and Crafts movement. The relief sculpture destabilizes the style and its underlying projections of the East by translating it into spatial terms that require viewers to move to a set position in order to see the image without distortion. Installed at Full Haus, the sculpture returns furniture to the gallery, acknowledging the space’s domestic interior.

Language plays an important role in Kwon’s practice, and in addition to her historical relief sculpture, coffee table comma books includes two of Kwon’s artist books. Her 2010 dongghab takes its title from the Korean concept of a social relationship between people of the same age. In 1963—the year of Kwon’s birth—Ed Ruscha published Twentysix Gasoline Stations and Sylvia Plath committed suicide by gas in her home. Taking this convergence as a departure point, dongghab explores an alternative form of self portraiture. Kwon’s 2017 book S as in Samsam, co-published by Secretary Press and Triple Canopy, also employs arbitrary similarity: a homophone between a Korean honorific for teacher and the ubiquitous English name Sam.

Kwon’s most recent work, Fiction, 2017, depicts a comma adorned with fake eyelashes. Of all punctuation marks, the comma is the most likely to be forgotten—with the possible exception of its twin, the apostrophe. The comma helps to locate the terms on either side, which could stand for an ideal practice of negotiating the self. As Kwon writes: “To a break in verse or a shift in pitch, like caesuras. In music, where a caesura is noted, metrical time is not counted…. Yes, to all that.”

Sowon Kwon (b. 1963 Seoul, Korea) has had solo exhibitions at The Kitchen in New York City, Matrix Gallery/University of CA Berkeley Art Museum, and the Whitney Museum of American Art at Philip Morris. Her work has also been featured in numerous group exhibitions including at The New Museum, The ICA Boston, MOCA Los Angeles, The Queens Museum, The Yerba Buena Center for the Arts in San Francisco, Artist Space, The Drawing Center, Artsonje Center in Seoul, Korea, the Gwangju Biennale, the Yokohama Triennale in Japan, and San Art in Ho Chi Minh City, Vietnam. She is a recipient of fellowships from The New York Foundation for the Arts in Sculpture, The Wexner Center for the Arts in Media Arts, and The Asian Cultural Council. She holds a BA from UC Berkeley, an MFA from Pratt, and attended the Whitney Museum Independent Study Program in 1991. She currently teaches in the Graduate Fine Arts Program at Parsons The New School in New York City.​
​