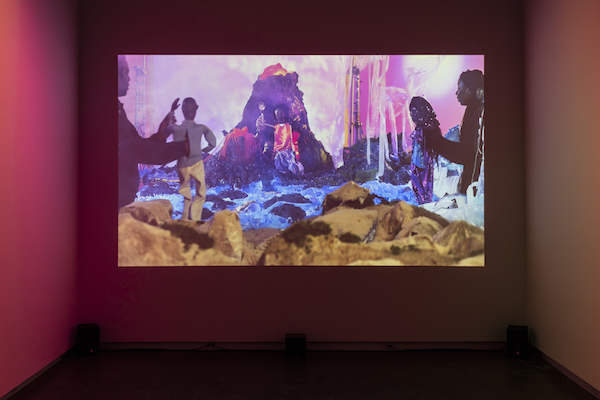 The artist and filmmaker Cauleen Smith, who recently relocated from Chicago to Los Angeles, rarely tethers her work to bare reality. Her latest film, Triangle Trade, 2017—made in collaboration with Canadian artists Jérôme Havre and Camille Turner—renders three new, fantastical realms, inhabited only by the puppet likenesses of the work’s three creators. Triangle Trade is on view at Gallery TPW in Toronto until November 11, 2017.

TWO YEARS AGO, I visited Toronto to do a site visit at Gallery TPW, where I had been slated to have a solo exhibition. I wanted to make a film in the city for that show, so I started meeting with a lot of black artists living in Toronto, hoping to find a few collaborators. I became really intrigued by many of these artists’ ideas about blackness; I sensed a lot of frustration about how whenever black history or experience is discussed, it’s always from an American point of view. But there’s a long history of black people emigrating from the Caribbean to Canada, which seems to create a kind of double colonial consciousness—an echo in terms of belonging and not belonging.

Ultimately, I chose to collaborate with the performance and multimedia artist Camille Turner and the sculptor Jérôme Havre. So much of Camille’s work is made through a speculative, science-fiction lens, and she loves to use Afro-Futurist metaphors to talk about alienation. It became clear we’d be able to have a very natural conversation within a project. And I just thought Jérôme’s work was so fresh—I had never seen anything like it. He was making things that—to me—were, crucially, not like anything that an American artist would make.

For example, Magnifique Isolation, 2009, was a stunning installation that he made of small, distorted human figures that hung from the ceiling, suspended in midair. I can’t really think of any African American artist who would hang a body. That decision was so intriguing, because it shows how the weight of history always presses itself upon aesthetic decisions.

I have to stress that our film, Triangle Trade, is equally mine, Camille’s, and Jérôme’s. Each of our segments in the film function independently of one another, and our respective puppets never really engage in dialogue. Even the terrains and topographies of our separate segments remain really distinct, which might, in some way, be symptomatic of the black diasporic condition.

My segment takes place on a volcano. My puppet talks about how it’s impossible for anyone to claim one, because it’s literally made up of matter coming from the core of the earth. I’ve been thinking about that concept a lot lately, and about how North American land is completely soaked in blood. It’s become increasingly troubling to me, especially when I try to imagine futures or forms of liberation or justice.

New land seems necessary, but, of course, all the land everywhere has been claimed and colonized many times over. I thought about other planets, but there’s a strange colonial project in that too. So, really, the only place you can arrive at and settle in without doing harm is at a lava berg.

The terrain in Camille’s segment is a completely imaginary and allegorical world. It looks nothing like Earth, and she describes it only in magical terms, rather than empirical ones. Jérôme’s is an island, but, more than that, it’s a kind of meta-space or feeling—the feeling of being adrift. It was an important challenge to create Triangle Trade together without necessarily agreeing on what time or space we were in. I think that’s an interesting lesson on how to get along with people in general. You may not all have agreements on where, and when, and who we are. 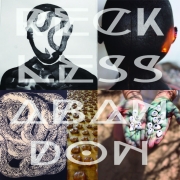