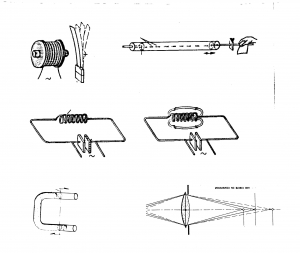 One of the two main components of a student’s course of study in the MFA-VA program at Vermont College of Fine Arts is a semester-long studio project in which the student develops and/or challenges specific aspects of their art practice under the guidance of an Artist-Mentor.

The VCFA Artist-Mentor network is comprised of prominent contemporary artists who mentor students individually, during the semester. With over 1500 Artist-Mentors across the United States and Canada, VCFA students are ensured mentorship with a different Artist-Mentor each semester. 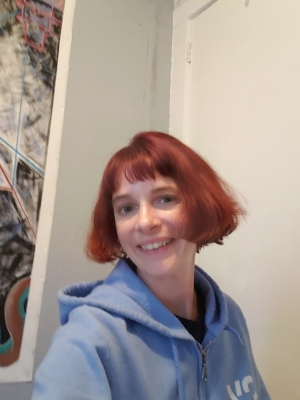 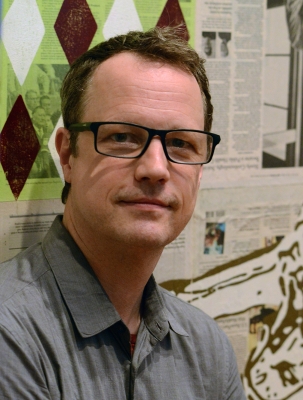 My studio project this semester consists of the exploration of a new medium for me: clay sculpture. I intend to translate my ideas that have previously existed only in 2D into 3D objects while still retaining the unique characteristics of my drawings and painting. These ideas include the ambiguity and fluidity of the boundaries that separate gender, the human and non-human, and the biological and mechanical.

VC Project Title: Abjection and The Representation of Woman in Horror Films from Puberty to Motherhood.

My visual cultural project this semester is a continuation of the previous semester’s research into abjection. For this project, I have taken the ideas present in Julia Kristeva’s Powers of Horror and have applied them to horror films from Carrie to Midsommar with a critical eye towards the depiction of the feminine experience.

Nils Karsten is Erin Snyder’s 3rd Semester Artist-Mentor and an Alumnx of the Visual Art Program. Originally from Hamburg, Germany, Nils apprenticed as a cabinetmaker in Berlin before moving to New York in 1995. He received his BFA from the School of Visual Arts in 1999, participated in the Skowhegan program in 2002, and received his MFA from Vermont College of Fine Arts in 2003. Since then, he has been a faculty member at the School of Visual Arts in New York.

His work has been shown in galleries and museums throughout the US, and internationally; including Pearl Lam Galleries in Hong Kong and Shanghai, China, ozasahayashi in Kyoto, Japan, Earl McGrath Gallery in Los Angeles, Marvelli Gallery, Ubu Gallery, Churner and Churner, and the Museum of Art & Design in New York, The Mint Museum in Charlotte, NC, The Museum of Fine Arts Houston, TX, the Pera Museum in Istanbul, Turkey, Gestalten Space in Berlin, Germany, and the Museo Valenciano de la Ilustración y la Modernidad in Valencia, Spain.

His work can be found in numerous private collections and in such public collections as that of the Brooklyn Museum in New York, the Mint Museum in Charlotte and the Weatherspoon Art Museum in Greensboro, North Carolina.

What is the structure of your exchanges?

E: It differs with each Artist-Mentor. Nils and I have a free form kind of conversation where we do talk about the work a lot – where it’s going and what I’m doing, but we also talk about artists I should look at, whether I’m familiar with them or not. Both Nils and my first Artist-Mentor, Cynthia Atwood, who is also an Alumnx, are both very familiar with the program so we also talk about what I am writing or reading for my Visual Culture Project, and how what I’m researching relates to what I am doing in the studio.

N: Erin has a good solid practice right now and is discovering things and building on that. I’m more of the outsider who sometimes reflects, digs a little bit and just reads the work. It’s an equal relationship in terms of discussing work and reading it, making suggestions. With Erin, sometimes it feels like we are peers, not like a student and teacher. I’m engaging with Erin as another artist, where you follow their threads. I’m curious to hear what inspires her. We talked about genre horror movies and her interest in that. It’s a very equal dialogue in the end.

Erin, how have these dialogues/exchanges affected your process and thinking regarding your work?

E: You can get stuck in your head too much when you are doing something, so I think it’s always helpful to have somebody from the outside come in with another perspective. Nils offers suggestions on what I might do, or path I might take that I may not have thought about before. Nils has also suggested I look at artists that maybe I haven’t taken a hard look at in a while. And of course, looking at other artists’ work helps you in your process. It helps you think about ideas and how to formulate them. 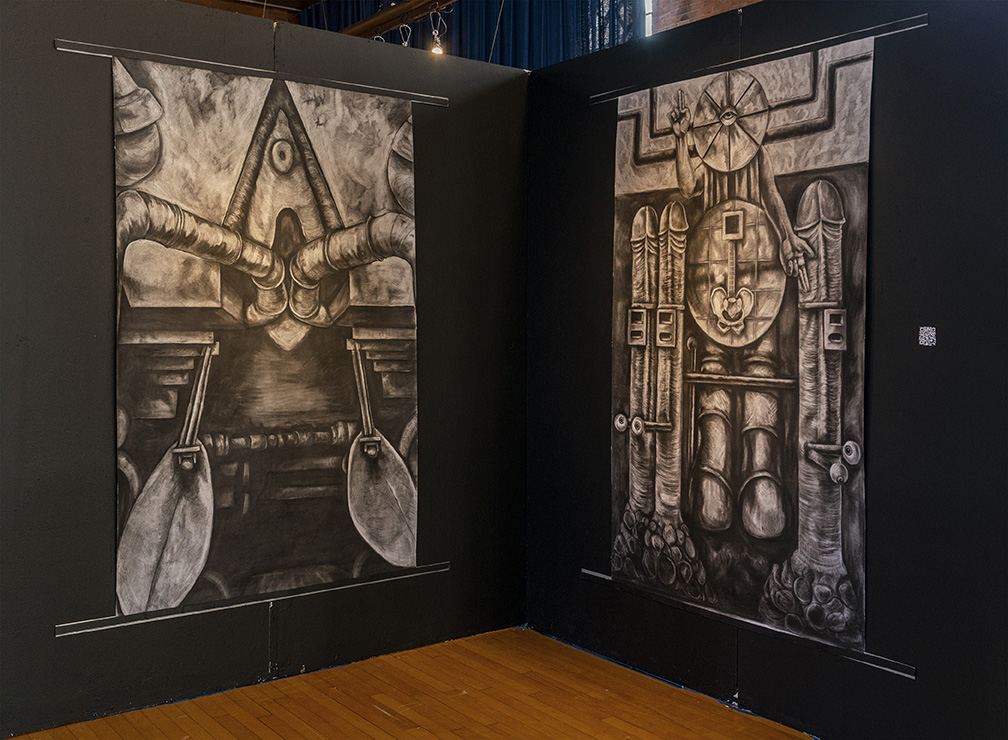 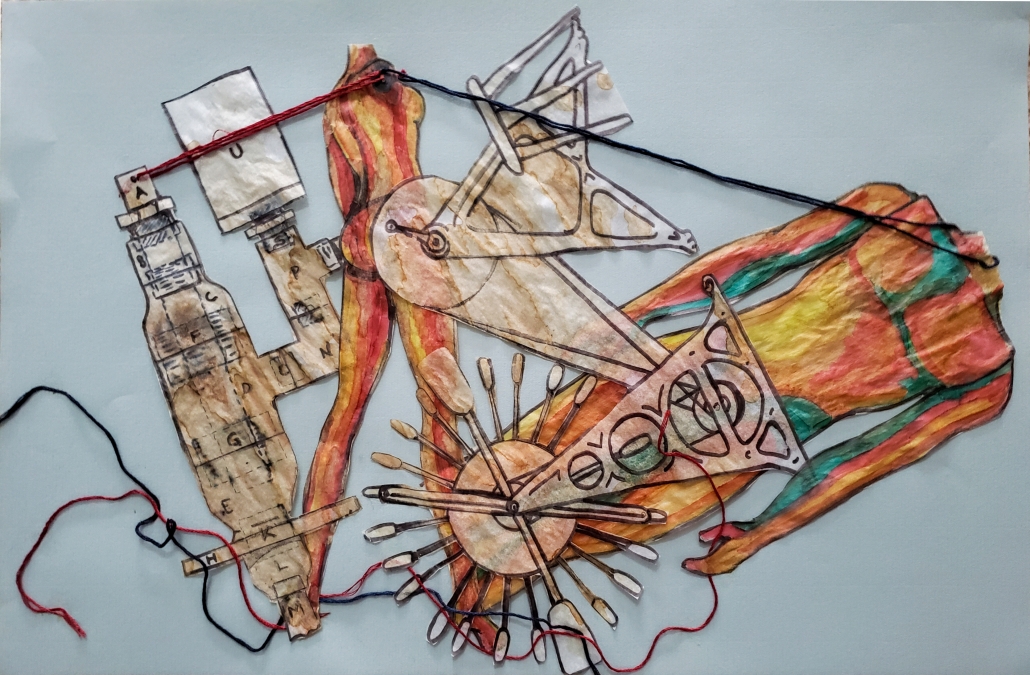 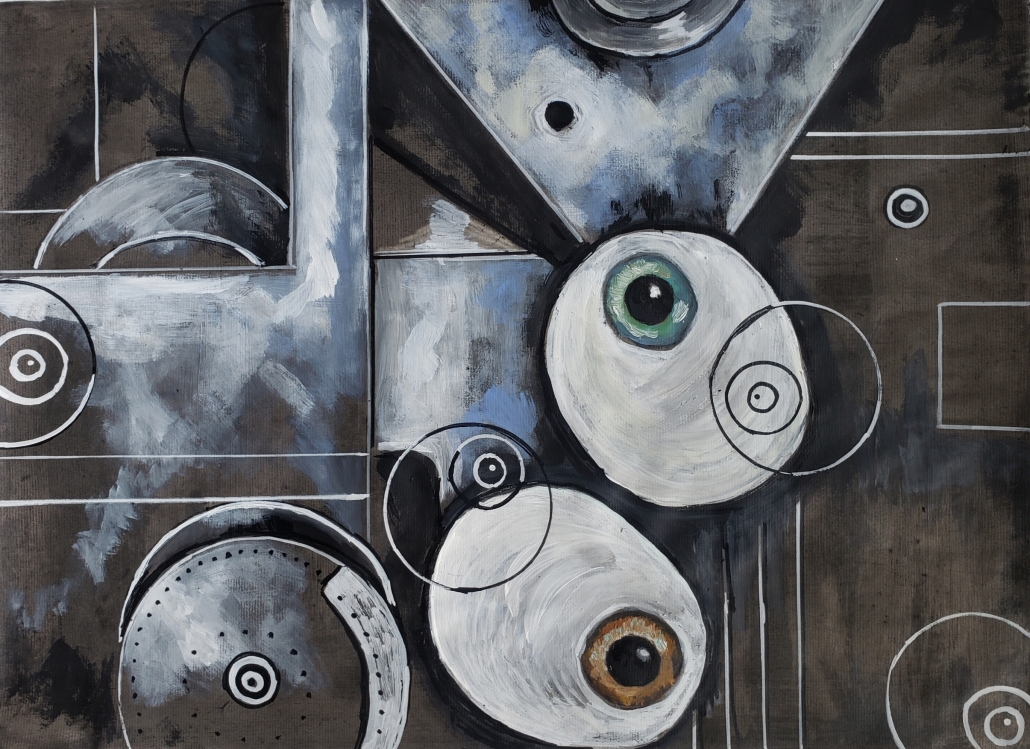 Can you describe a pivotal exchange with Nils that helped shift something for you?

E: I’m making these little sculptures and it’s my first real big foray into that medium. I’ve been thinking about them as being just these pieces that I am going to photograph to put in the virtual residency exhibition and Nils suggested thinking more about their interaction with the environment. Where, and how, do I want them to exist in a space?

The piece I am working on now is a culmination of thinking and marinating on these ideas we talked about at our second meeting. I am thinking about how I can push that into the future and my thesis show. What do I want to present and how do I want to present it? Those ideas have been very fruitful – they keep popping up and I keep working on them.

N: I would add, I do think the first big shift really came from Erin herself with the shift from making two-dimensional work into three-dimensional. It was her task for the winter residency. That’s what she wanted to do this semester and I totally supported it. As Erin said, now there is something more installational going on here, and there is a place for her two dimensional work to come back into the new body of work. Other components will eventually be part of this work.

I’m sure we will continue that dialogue for the next two months, and especially when we get closer to the residency. Making art is a fragile practice and I think the student should take the lead. It’s a very sensitive, transitional kind of time and we all know in the end a semester is very little time, and as artists we don’t think in terms of semesters.

E: Absolutely. It’s not like this semester is over and I’m starting on something new. It’s a culmination. I view my career at VCFA as a culmination and so my thesis show will be the high point of everything I have learned and taken and experienced and brought forth. And absolutely a beginning.

N: I do sense a beginning. You are very energized, you jumped onto something and it seems like things are really happening. This will continue into the final semester and beyond. And there are going to be some difficulties again or you’ll make another big turn. But it feels like Erin is making a big turn right now and I’m not thinking that I initiated that. She initiated that herself at some point earlier this year when she made up her mind to jump into this three-dimensional world. That for me is also a lot of fun you know, seeing the excitement.

How have you been challenged this semester?

E: I’m working in a medium I am not very familiar with. I’ve always stuck with 2D work. Learning how to think three dimensionally in a piece, how to construct it, how to work with the material, and deciding what material I wanted to work with, are all challenging. But that’s part of the excitement too, because it’s brand new. It’s a brand new relationship where I’m figuring things out. I’m working on it. It’s like being with a new person for the first time. You are learning everything about them and how exciting is that?!

How has the VCFA Student – Artist-Mentor model informed the way you approach your process?

E: I have been very fortunate in that all my Artist-Mentors have been fantastic people. And they all come from a variety of disciplines. When I first started, I was doing these giant charcoal drawings and my first Artist-Mentor, Cynthia Atwood, who is a sculptor, brought a different perspective to my drawings. My next Artist-Mentor was Amy Jenkins, a photographer, who brought in a different perspective. For me that was always interesting and refreshing to get a variety of different opinions and ideas.

All of my relationships with my Artist-Mentors have been hugely influential. They supported me in trying new things and to not be afraid that this new thing isn’t working, but to try, to play, and have fun, while also producing good work. It’s like I’m having a friend come over and they’re looking at my work, giving me suggestions and ideas. They are interested in what I am trying to convey and how I am reading my work.

I think it’s a wonderful structure. I have had just a great time and I’ve been exposed to so many ideas about making art and what art means. I may not have gotten this if I was in a more traditional program.

What advice would you give a new student who is thinking about selecting an Artist-Mentor?

E: It’s a very close relationship and it should be a collaborative one and not an adversarial one. You want to make sure you are working with someone who understands your strengths and weaknesses and not be put off by that. I would also say don’t look at what medium they are working in, look at their actual work. All of my Artist-Mentors and I had very similar ideas about what we wanted to convey although we were working in different mediums. It’s less about the medium and more about the ideas. You shouldn’t be afraid to switch mediums if your ideas would be better served in a different medium.

For new students, I would definitely look at Artist-Mentors who are Alumnx of the program because they know what you have to go through. They know the process, which is very different from more traditional programs. It’s also helpful in that they would understand the Visual Culture piece of the program. Knowing that, sometimes, you are going to be heavily into research and writing and your work isn’t always going to be studio work.