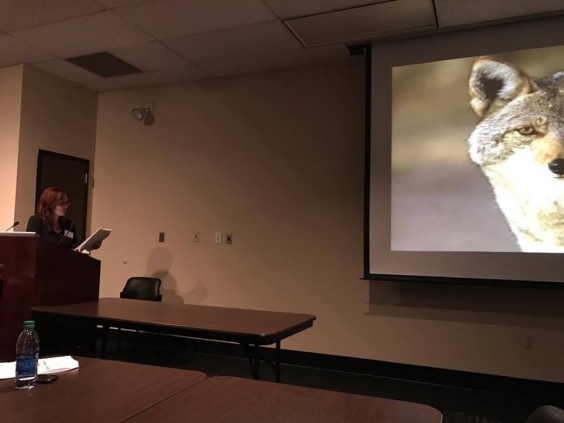 Along with Eddy and Watson, a third VCFA alumna, Janell O’Rourke form the ArtAnimalAffect coalition. Formed in 2013, its mission states:

“a coalition of artists whose work exists within the critical and multidisciplinary framework of animal studies. This blog will serve as an online presence for our collective to include art, exhibits, booklists, and the occasional recipe. Through our artwork, we aim to raise the awareness of animal issues, as well as provide exhibit opportunities for contemporary artists working with human and non human animal relationships.”

Together, Eddy, Watson, and O’Rourke have co-edited The Art of the Animal: Fourteen Women Artists Explore the Sexual Politics of Meat, published by Lantern Books, NYC. A catalogue and book of essays that support the work currently on view at The Animal Museum in Los Angeles, that ArtAnimalAffect have also co-curated.

During the Living With Animals Conference keynote speaker and Emeritus Professor of Art History at the University of Central Lancashire, UK, Steve Baker, called the exhibition at The Animal Museum “timely and important.”

As a coalition, Eddy, Watson, and O’Rourke continue to investigate the intersectionality of racism, sexism, domestic violence, and the oppression of animals. Indeed a timely and important pursuit.