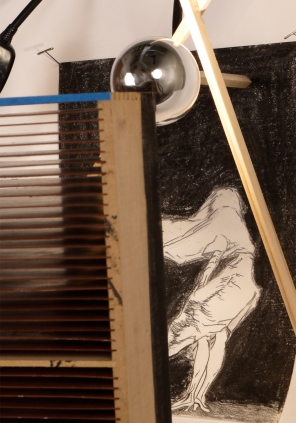 Baldwin sees similarities between Goya’s works and contemporary graphic novels, and responds to these parallels by stripping out elements from both, collaging them together, and reinterpreting them into a three-dimensional construction. Taking a cue from the cells of the comic book page, he reconfigures the gallery space, allowing the viewer to wander through it in new ways. The exhibition also includes Baldwin’s first effort in producing a soundwork, a swerved and reconfigured version of Dmitri Shostakovich’s String Quartet No. 15—a piece in itself that penetrates an awkward hallway space, and amplifies the dark feeling found throughout the show. Opening reception to be held Friday, Nov. 4, 6 to 10 pm.

Tiger Strikes Asteroid is a network of artist-run spaces with locations in Philadelphia, New York, and Los Angeles. Each space is independently operated and focuses on presenting a varied program of emerging and mid-career artists. Our goal is to collectively bring people together, expand connections and build community through artist-initiated exhibitions, projects, and curatorial opportunities. We seek to further empower the artist’s role beyond that of studio practitioner to include the roles of curator, critic, and community developer; and to act as an alternate model to the conventions of the current commercial art market.