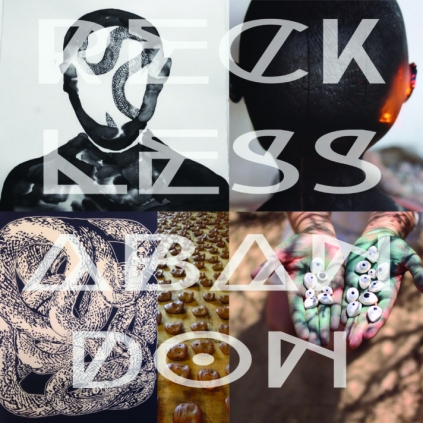 “I think people are getting these catastrophic feelings, that this is the end,” says Thais Mather. “I don’t believe in that. I think this is a beginning.” The feminist artist’s new exhibition, Reckless Abandon, comes at a time of cultural, political and environmental upheaval. It’s an ideal moment to examine human history from a revolutionary stance—and present urgent questions that can reveal a new path forward. Through a monumental art installation and a series of performances and events, Mather will challenge viewers to abandon patriarchal structures in favor of a transcendent vision for humanity. Reckless Abandon opens at form & concept in Santa Fe on Friday, November 24, 2017, and runs through February 18, 2018.

“I’m really contemplating humanity: how culture began, where we are now, and where that might evolve,” says Mather. Reckless Abandon comprises hundreds of artworks that will fill form & concept’s ground floor, tracing thousands of years of natural and human history. Mather’s explorations for the show started with a series of large, intricate woodblock prints depicting octopuses, snakes, tarantulas and other creatures. These animals were traditionally vilified by humans because their anatomy is so different from our own, and because their consciousness seems alien. “They are considered ‘total others,’” says Mather. “I’m connecting these themes to the ways in which women have been misunderstood and colonized because we are always foreigners in our own land.”

From this departure point, Mather has created a number of large-scale installations that incorporate ceramics, videos, drawings and other media. Reckless Abandon is a culmination of Mather’s artistic experience thus far. She grew up in Santa Fe, and got her degree in printmaking from the University of Montana in 2006. In 2011, she enrolled as an MFA student at Vermont College of Fine Arts. There, her focus shifted from technical expertise to conceptual rigor as she studied installation, social practice and critical theory. Prominent feminist artists Faith Wilding and Michelle Dizon became her mentors.

After returning to Santa Fe in 2013, Mather furthered her studies of feminist theory and incorporated what she was learning in the bodies of work Wonder Bitch and The Anonymous Author. She exhibited both series in solo exhibitions in Houston, Texas, but initially struggled to find an audience for her work in the famous art market of her hometown. form & concept Gallery Director Frank Rose offered Mather an exhibition in fall 2016, and she’s been hard at work ever since.

“Thais’ multidisciplinary approach was a perfect fit for us,” says Rose. “We look for artists who are open to crossing perceived barriers between art, craft and design in service of powerful storytelling. Thais combs through eons of visual history, and emerges with imagery that disrupts entrenched narratives.”

Reckless Abandon is Mather’s first major show in Santa Fe, though she hesitates to call it a solo exhibition—at least in a traditional sense. “I feel like the concept of the male genius artist presenting his solo magnum opus is a Greenbergian farce. Everything you create is influenced by other artists, by your mentors, by your relationships, by the music and literature you adore.” Mather says. She’s working with a number of feminist artists to present a series of performances in the space, and also considers gallery visitors to be collaborators when they cross the show’s threshold. The exhibition will evolve through these contributions and interactions, inspiring community members to return multiple times and experience new surprises. Inspired by the magical realist movement, Mather aims to weave moments of enchanting transformation into everyday life.

“Reckless Abandon is a call to action, not just for us to treat one another and our planet with care, but also for us to abandon what we think we know, in order to create a life of magic in the next phase of our evolution,” says Mather. The artist will answer her own challenge by donating the proceeds of several artworks from the show to nonprofit organizations that focus on social and environmental activism. “We will have to create the impossible if we plan to survive. So why not use our imagination—a force, which as the psychoanalyst Donald Winnicott taught me, is our prime source and mechanism of survival,” Mather says.